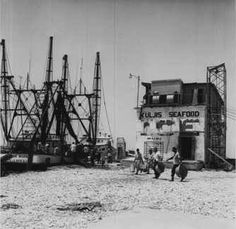 Kuljis Seafood & Oil Wharf was a commercial seafood processing company owned by Peter Kuljis, Sr. and Steve Kuljis, Sr. The company was located on Highway 90 in the Point Cadet neighborhood of Biloxi, Mississippi. Like many other prominent Biloxi seafood businessmen of the 20th century, Peter and Steve Kuljis were of Slavic heritage. These immigrants made their way to Biloxi searching for a better way of life. The Slavic Benevolent Association nominated Kuljis Seafood & Oil Wharf for their “significant role in the success of the Biloxi seafood industry”.

In their nomination letter, the Slavonian Lodge lists Kuljis Seafood as an entity which made significant contributions to this region. The letter goes on to state that multiple generations have flourished due to the commitment of individuals such as Peter Kuljis and Steve Kuljis. Kuljis Seafood & Oil Wharf is listed along with other industry giants such as Mavar Shrimp & Oyster Company, Inc., Anticich Canning Company, and Gulf Central Seafood Company. The decedents of these prominent individuals have gone on to make the Gulf Coast the destination that it is today. The contributions and success of Peter and Steve Kuljis are indicative of everything it means to be a part of the maritime and seafood industries. They succeeded in finding the American Dream in Biloxi, Mississippi.