Johnny Fayard spent much of his early life living in St. Martin, developing skills with crab traps and gaining experience in the seafood factories. Wendy Fayard, maiden name Anglado, grew up in d’Iberville Mississippi and was a graduate of d’Iberville High School. At age fifteen, she married Johnny Fayard, and the two founded J&W Seafood, she would attend school during the morning and assist Johnny with the day to day operation of the business after school hours. They began their career making deliveries in a remodeled Borden Milk pickup truck. The majority of these deliveries were made to upstate Mississippi. Their business expanded in the early 1980’s when they acquired Dunaway’s Crab Factory on Crawford St. in Biloxi. Throughout this decade, their business would see additional changes, which began when they stopped picking and handling crabs in the mid-80s. By the 1990’s, the company stopped processing shrimp, as J&W Seafood made the majority of their profit handling oysters and fish.

Many aspects of J&W Seafood reflected the various changes across the Gulf Coast throughout the 80s and 90s. The company employed around forty oyster shuckers, many of whom were Vietnamese in origin. Among the 500-700 sacks of oysters processed per day, the majority of purchases were made by seafood markets, restaurants, and casinos follow the legalization of gambling in the 1990s. Johnny Fayard was also instrumental in working with the Department of Marine Resources to help develop a Hazard Analysis and Critical Control Points (or HACCP) to implement in the seafood industry. This type of system was developed to help reduce the spread of biological pathogens, chemicals, and physical hazards in the food production process.

J&W Seafood continued production for many years until 2005 when Hurricane Katrina struck the Gulf Coast. The hurricane completely destroyed the factory. Due to complications with insurance and regulations, the family decided not to reopen the factory. While the Fayard family has fond memories of their years in business, they remain active on the Gulf Coast, serving on the Blessing of the Fleet committee with their two daughters Misty and Melissa. It is their hope that their daughters and granddaughters, Emma Grace and Presley, will help carry on their heritage. J&W Seafood carries on as a power example of the late 20th century and early 21st century image of Biloxi. 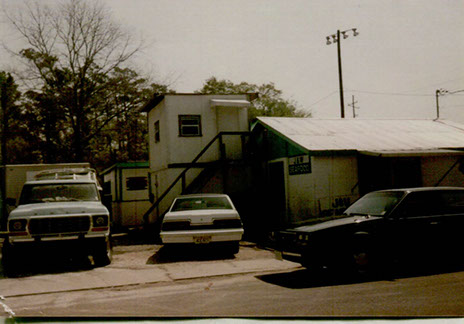 J&W Seafood was a joint venture between John “Johnny” Fayard Jr. and his wife Wendy Fayard which opened in 1979. The seafood heritage of the Fayard family dates back to the late 1800s in France. This included a long line of seafood workers, fisherman, and boat builders. Johnny Fayard’s great-grandmother, Christine Brosh Boutwell Adams, was featured in a book by Louis Hines as a worker in the seafood factories at the age of eleven. His paternal grandfather, Rudolph Fayard, assisted in the construction of the Princess Ann. His parents John “Bootise” Fayard Sr. and Dorthory “Dot” Boultwell-Fayard both worked in the seafood industry as well. Wendy Anglado’s heritage dates back to France where her ancestors were fishermen. Her father, George Anglado, made his living managing shrimp picking machines throughout the seafood factories in Biloxi.