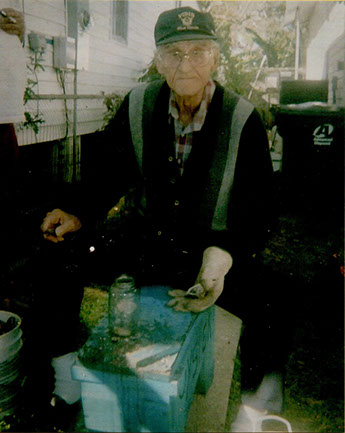 Joseph August Smolcich, known to many as “Smokey Joe,” was a boat captain and commercial fisherman from Biloxi, Mississippi. He was born on August 15, 1922 to Joseph A. Smolcich, Sr. and Frances Cvitanovich Smolcich. He was called upon to help with the family business and dropped out of the eighth grade. He drove a truck and delivered seafood to northern Mississippi for the Biloxi Canning Company.  Joseph married Anna Kopszywa in 1939 and took up residence on Oak Street in Biloxi.

Smokey Joe worked with his father on the vessel Michael Fayard, while working for Leckich and Fayard Seafood. He became captain of the Joanne Fayard in 1958 and would remain so until 1989 when the boat was sold by Leckich and Fayard Seafood. The Joanne Fayard became a favorite in the annual Blessing of the Fleet. Smokey Joe also ran the Gulf Star until it hit a well jacket and sunk just inside of Ship Island on a Saturday night. Smokey Joe worked through the weekend and managed to raise the boat by Monday morning.

He would later run the Margret Anne for Michael Kopszywa but quickly realized that retirement was fast approaching. Even after his retirement as a boat captain, he wanted to stay in the seafood industry and found work with Steve Marinovich at Marinovich Trawl Company for three years.

Though Joe was often gone for weeks at a time, he remained a devout Catholic and attended St. Michael Church. He also made time to visit his children at school and enjoyed sharing exhibits and displays with their classmates. He was asked to reign as Shrimp King several times, but he was a modest man and refused the honor.  Smokey Joe and Anna were forced to move after Hurricane Katrina, in 2005, destroyed their family home. His beloved Anna passed away in 2010, and only months later, Joseph August Smolcich passed away on October 9, 2010.

Smokey Joe was a diligent worker and devoted family man.  He will be remembered for his contribution to the seafood industry.