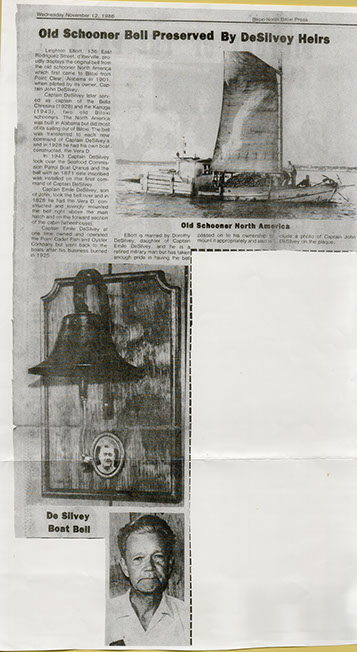 If one were to walk down East Rodriguez Street of the community of d’Iberville in 1986, they would likely encounter the historical boat bell of the schooner North America on display; the original owner was Captain John DeSilvey. Born in the year 1856 in Point Clear, Baldwin County Alabama, John DeSilvey spent much of his life as a tradesman of various capacities. Prior to leaving Alabama, DeSilvey worked as a carpenter, a skill he would later use in his contributions to Biloxi.

DeSilvey arrived in Biloxi at the age of 45 in 1901 aboard his schooner to work as a fisherman. He would become a well-known member of the Point Cadet community. During his time in Biloxi, DeSilvey would be involved in many activities both vocational and civic-oriented. Beyond his carpentry work, DeSilvey spent the majority of his life as a fisherman, benefiting from the rich resources that the Gulf Coast offered. DeSilvey became well-known in Biloxi, serving as captain of the North America, then of the Bella Chresina, and then finally the Kanuga. In 1928, DeSilvey had the honor of having his own boat constructed which became his signature, the Vera D. These schooners spent the length of their careers at Captain DeSilvey’s command before the Vera D was passed on to his son Emile DeSilvey.

Captain DeSilvey is perhaps best remembered for his civic contributions to the Gulf Coast, most notably in the realm of construction. DeSilvey was instrumental in the establishment and building of the original St. Michael Catholic Church, located on 1st Street. DeSilvey had long been involved in the activities of the church parish, so when the time came to construct this historical edifice, DeSilvey utilized the carpentry skills he honed years ago in Point Clear.

DeSilvey was a resident of Biloxi, making his home at 1808 East Howard Avenue. He spent his life devoted to his wife and ten children, son:  Edwin, Paul, Emile, Archie, Mack, Clarence, and Roy and daughters: Mrs. William Henderson of Mobile, Mrs. Alfonse Saujon of Biloxi, and Mrs. E.C. Hillebrand. He had thirty-seven grandchildren and nineteen great-grandchildren. In his personal life, DeSilvey enjoyed writing and and contributed to the local newspaper, the Daily Herald, in “Paragraphs of Local Interest.” This essay was entitled “How a turtle should be cooked.” A public endorsement of Biloxi Mayor, John J. Kennedy, and Commissioners M. L. Michel and John A Swanzy bearing Captain DeSilvey’s name appeared in an edition of the Daily Herald dated May 28, 1930.

John DeSilvey passed away on December 21, 1936. In his obituary, he was described as a “member of a large and well known Point Cadet family.”