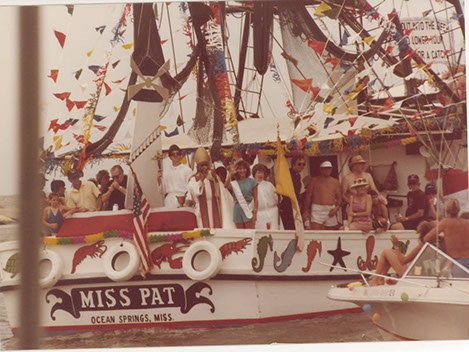 James Sidney King, better known as “Captain Sid,” is remembered for a lifetime of shrimping and love of the Gulf Coast way of life. Born on July 12, 1930 to Sidney G. King and Dorothy E. King, James King would spend the second half of his life as a devoted fisherman along the Gulf Coast. In 1949 at the age of 19, King enlisted in the U.S. Airforce and was stationed at Keesler Air Force Base in Biloxi. Keesler had only been established as a base for eight years at that time.  King remained in the Air Force until 1970, retiring as a Senior Master Sergeant.

After retiring from the Air Force, King went to work as a manager for Ingalls Shipbuilding, working in wage, salary, and insurance. King had owned recreational fishing boats, but in 1978 he decided to move in a different direction with this love for the water by purchasing a 55-foot wooden hull shrimp boat. Captain Sid would name his vessel the Miss Pat and began pursuing the commercial aspects of shrimping. As described by his son, M. Keith King, while Captain Sid loved the lucrative features of shrimping, he had a deeper love and appreciation for the comradery shared among the multiple individuals who made up the shrimping industry.

The Miss Pat spent fifteen years in operation and is best remembered as a boat that made numerous appearances in the annual Biloxi Blessing of the Fleet.  The boat was originally built in 1975 in Ocean Springs by Raymond Beaugez and given the name “Big Moe.” It was designed as an oil screw, one deck, one mast ship with a raked stem and square stern. King purchased the ship on December 26, 1978 and began a lengthy process of extensive repairs. On June 18, 1980, King was awarded a Certificate of Incorporation and formally changed the name of the ship to Miss Pat, named in honor of his wife Patricia King.

Captain Sid participated in the Landing of d’Iberville in Ocean Springs with his ship and was the recipient of multiple awards for best decorated ship during his participation in the Blessings. As a fisherman, Captain Sid maintained the Miss Pat, keeping his ship in excellent condition, and fishing mainly in local waters with the occasional trip into Louisiana each year. Beyond his life as a fisherman, Captain Sid was an active member of his community. He served as president of the Ocean Springs Harbor Commission for several years as well as serving on the board of trustees for the Singing River Hospital System from 1986 to 2000. For thirteen of those years, Captain Sid served as the president of the board, during this period of time he was named Trustee of the Year for the State of Mississippi.

Tragically, in the early 1990’s, the Miss Pat caught fire, burned, and sank off the coast of Biloxi, just south of the Mississippi Coast Coliseum. King would live out his final years serving his community and enjoying both his family and the coastal environment that was his home. Captain Sid passed away on April 29, 2003.