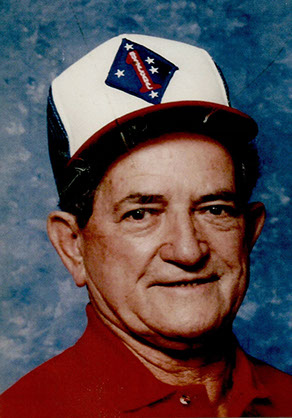 For over sixty years of his life, George J. Higginbotham was a dedicated worker in Biloxi’s seafood industry. Born in Youngsville, Louisiana in 1921, he was the second son of Nelson and Edna Delcambre Higginbotham. The family was of French decent. They moved to Biloxi in 1929 to find work in the thriving seafood industry, and George began working at a very young age. He worked in both the factories and aboard boats until he and two of his brothers joined the United States Marine Corp during World War II.

While serving in WWII, George was shot and wounded in action. For this sacrifice he was awarded the Purple Heart Medal.  After returning home from war, he owned and operated his own seafood factory, Seaway Seafood.  He served as president of the company for ten years. He and his cousin later merged their businesses into Del Seaway. He owned his own fishing vessel, North America. George and his wife Jewel were parents to eleven children.

In 1998, George was honored by being selected as Shrimp King for the Biloxi Blessing of the Fleet.  In a double honor, his granddaughter, April Higginbotham, was chosen as Shrimp Queen that same year. Throughout his life he was a devout Catholic and member of St. John Catholic Church. He was a member of several civic organizations including: the French Club, Biloxi Elks Lodge, the Purple Org., and Knights of Columbus. Because of his deep respect for all who were wounded in service to the United States, George was instrumental in the building of Biloxi’s Purple Heart Monument located in Glennan-Guice Park, adjacent to the Biloxi Small Craft Harbor.

George J. Higginbotham passed away on July 28, 2014. He was known as a very generous and caring man, always willing to lend a hand to anyone in need. This generosity was evident in everything he did, from bravely serving his country in war, to his work in the seafood industry.  George J. Higginbotham did not seek fame and fortune but merely success for his family and his fellowman.