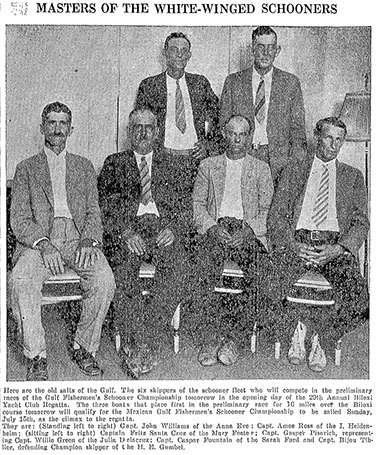 Throughout Fritz Santa Cruz’ life, he captained a variety of schooners. Fritz was born on March 8, 1870, in an area of Harrison County which is today known as D’Iberville. Like many other members of his generation, Fritz got his start working at a young age and would grow up to perform maritime work. One of his main job duties as a schooner captain was transporting lumber to various processing facilities via schooner. Fritz became a valuable and well-known skipper, who often participated in the Biloxi Schooner races of the early 20th century.

Throughout the 1920s, Fritz Santa Cruz gained notoriety for his ability and talent as a boat captain. In 1927, Santa Cruz piloted the H.E. Gumbel and was the winner of that year’s Biloxi Regatta. A year later, an article entitled “Burns Banquets Boat Skippers” included a photograph of Santa Cruz at the annual banquet honoring Regatta skippers which was held at the Edgewater Gulf Hotel. The event was described as being one of the first gatherings of the regatta commanders before the races, in which members were given a chance to arrange instructions and conditions for the following season. Captain Fritz appeared with other individuals such as Commodore G.J. Wiltz of the Biloxi Yacht Club, as well as Captain John Amos and Captain John Williams. For the 1928 season, Santa Cruz was listed as captaining the Mary Foster, and described as being very optimistic about that year’s schooner races.

Captain Fritz Santa Cruz would enjoy a life spent on the water until he passed away on November 3, 1952. In his lifetime, Santa Cruz was able to make a career from a personal passion, not all members of his generation can say the same. The bounty of the Gulf Coast made that possible, and the beautiful Gulf of Mexico served as the stage for a celebrated career of all things nautical. The legacy of Fritz Santa Cruz carries on, remembered for his aptitude at sea as a captain, and his appetite for racing.