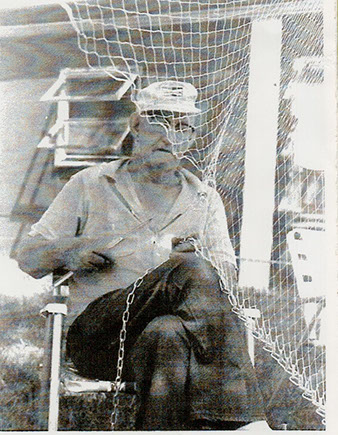 Elvin Oscar Ramsay was a captain and industry tradesman born April 22, 1907 to Andrew Jackson and Sue Cooper Ramsay in the Pointe-Aux-Chennes community. Growing up in the Fountainebleau area of Jackson County, a large portion of Elvin’s childhood was spent hunting, fishing, shrimping, crabbing, and oystering. These early experiences would lead Elvin to working on shrimp boats, a profession he would hold for over two decades prior to World War II.  Ramsay eventually became a captain, fishing in the Gulf in a period of time where shrimp catches were extremely plentiful, so much so that the deck of his boat was often covered with shrimp.

Elvin Ramsay was a man of strength of character, as he experienced many hardships while at sea. As a boy, he contracted malaria and would sometimes suffer flair ups at sea, with little or no medication available. In some cases, while sleeping on the deck of the ship, he would have snakes crawl into his sleeping bag. Despite these difficulties, Ramsay loved his career on the water and had the honor in 1929 of working on the boat which carried Fr. Carey during the very first Blessing of the Fleet. It was a notable year because the Blessing was a duel event, taking place both in the Biloxi Bay and along the Biloxi shoreline of the Gulf of Mexico.

Ramsay and his crew were shrimping in the Louisiana marsh when they received word that the United States had entered World War II. Ramsay was only a few months shy of being too old to be drafted, but he enlisted in the United States Navy and served on the Wilkes-Barre in Japan. While serving in the Navy, he utilized many of the skills he developed as a fisherman and taught many young sailors how to knot and mend nets. He was also a good swimmer from participating in many races from the mainland to Ship Island, a skill which granted him weekend passes while his fellow sailors underwent intense swimming lessons. After returning home from war, Ramsay continued to work at the Biloxi V.A.

Elvin Ramsay married Vera Teresa Seymour and they had two sons, James Byron and Francis Verlin, both who followed in their father’s footsteps working in shrimping and oystering. The family resided on Quave Road in D’Iberville and their house weathered Hurricane Camille in 1969. It remained standing until it was destroyed by Hurricane Katrina. Elvin was involved in the Fisherman’s Union of New Orleans, numerous baseball teams, and often enjoyed teaching his craft to anyone who was eager to learn. Ramsay was a man of character and abstained from drinking and gambling, he refused to run liquor in from the Gulf during prohibition, a time in which many of his contemporaries profited from such work.

Elvin Oscar Ramsay passed away in November of 2000. While most of his generation has passed on as well, his legacy lives on. Many of his grandchildren found work in factories such as DeJean’s and Gollott’s. The names Ramsay and Ramsey were both placed on plaques around the Golden Fisherman, memorializing the fishing families of Biloxi. Elvin Ramsay’s stories of the sea and tales of a way of life long gone are fondly remembered by his children and grandchildren.