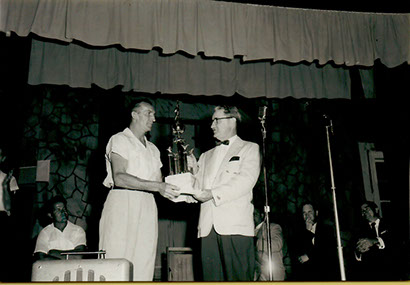 The “Bohemian” or seasonal seafood worker helped shape the expanding town of Biloxi, Mississippi during the turn of the twentieth century.  Transported from Baltimore, Maryland by railcar to process the oyster and shrimp harvests, most were Polish or Czech immigrants who lived in the “camps” for a season, then returned to Baltimore. The process was repeated annually becoming a way of life for the Bohemians.  The Kopszywa family of Biloxi is an example of one such family of seasonal workers.  Edward E. “Cotton” Kopszywa, Jr. was born in Baltimore in 1916, the son of Edward, Sr. and Mary Agnes Misiora Kopszywa who were both Polish immigrants arriving in the U.S. in 1904.

According to the 1920 Census, the eight children of Edward and Mary Agnes were alternatingly born in Maryland and Mississippi over several years, attesting to their migrant worker status.  By 1929, the family established permanent residence in Biloxi on Oak Street.  Edward worked aboard Biloxi’s first schooners and Mary Agnes was a factory worker.  Later, they would open a grocery store on Back Bay Biloxi and add a local meeting place for seafood workers known as “Fisherman’s Hangout”.  Edward would also own and captain two boats, the Miss Poland and the Anna Leona, before passing from this life in 1962.

Ed Kopszywa began working in the seafood industry as a boy, as did his brothers and brothers-in-law.  After his eighth-grade graduation from St. Michael Catholic School, Ed became a boat captain and worked for the Taltavull Seafood Company for years until 1949 when he bought his own boat, Captain Roy, and worked that vessel for 25 years.  Because of his knowledge of the seafood industry and his years of experience on the Gulf of Mexico, but primarily because of his deep concern and commitment to the preservation of the industry, Ed was appointed to the Mississippi Marine Conservation Commission by Governor William Waller.  He was also elected President of the Mississippi Gulf Coast Fishermen’s Association.  During his tenure, Ed made trips to Washington, D.C. to testify before Congress on the state of the seafood industry on the Gulf Coast of Mississippi.

Ed married Madeline Prims of Lyman, Mississippi and they were parents to five daughters and one son:  Marie, Barbara, Carol, Angela, Madeline and Edward, III (Eddie).  Ed was a very active member of St. Michael Catholic Church and was an annual participant in the Blessing of the Fleet for decades.  Captain Roy won many first-place trophies during the events.  Not only were fishing and the Gulf his livelihood, but they were also Ed’s pleasure.  He loved nothing more than taking family and friends on fishing trips on the Captain Roy each year.  He especially looked forward to an annual Chandeleur Island trip with local businessmen which was like a fishing rodeo with points and prizes awarded.

Ed retired from commercial fishing in 1974 at the age of sixty-one.  He passed away on January 6, 1987 and his buried in Biloxi Cemetery.  The Kospszywa family is a prime example of the heart and soul of Biloxi’s Seafood Industry.