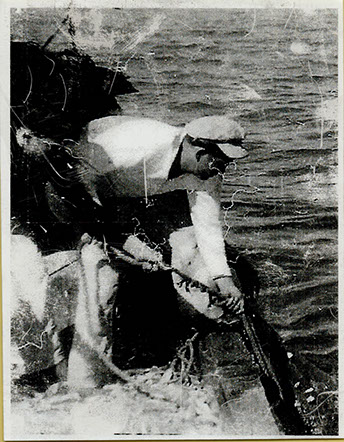 A lifetime resident of the Gulf Coast as well as a pillar of the value of hard work, Biloxi resident Peter J Pitalo is remembered for his far-reaching service and meticulous work in the seafood industry. Born on March 22nd 1919, Peter J. Pitalo was the second surviving son of factory and boat owner Alexsandro Pitalo and Kadica Sekul Pitalo, Croatian immigrants who arrived in the United States in the early 20th century. From a young age, Peter was instilled with the importance of diligence, as he was employed in Seacoast Packing as a child. Being one of five surviving siblings, Peter worked alongside his mother and his brothers picking shrimp in the family factory. At the time he began work, he required a crate to stand on to reach the counter.

As Peter developed experience within his family’s factory, he moved from peeling shrimp to opening oysters. During his time in the factory, he became renowned among fellow seafood workers for his ability and prowess in the factory setting. Peter also became very skilled with cast nets, a talent which led him to work on his family’s boats during the summers while home from school. After years of honing all of these skills, Peter left school at age fifteen and went to work full time on his father’s shrimp boats.

Peter would work in conjunction with Seacoast Packing and onboard his family’s shrimp boats, his family owned a share of the business along with his mother’s brothers Peter and Steven Sekul. The Pitalo family owned four shrimp boats including the Christmas Eve, the Five Brothers, the No Sisters, and the Catherine Pitalo. Peter worked on all four of these vessels and eventually captained the Catherine Pitalo, a position he would hold for over twenty years. Peter captained this shrimp boat off the coast of Mississippi, Louisiana, and Alabama. Outside of shrimping seasons, the Catherine Pitalo was used as a freighter, carrying produce such as watermelons from Grand Isle, Alabama and New Orleans Louisiana.

Throughout his life, Peter J. Pitalo was a devoted Catholic and many of the core tenants of his faith contributed to his hardworking attitude. He attended St. Alphonses Catholic Church and was said to have never missed a Sunday of Mass. In 1952, he married Mary Whittington and would father his first child in 1958. Following the birth of his first child, Peter took his leave as captain of the Catherine Pitalo and began work on land. He spent years working for the Shell Oil Company as well as the American National Insurance Company. Despite leaving the water, Peter never forgot his love for the Gulf Coast, and this could easily be seen to his devotion to his community. Peter was a member of the Slavonian Lodge as well as a church usher and President of the Knights of Columbus.

Peter J. Pitalo’s love for the coast continued until his final days when he passed away on July 4th, 1982 in Ocean Springs at the age of sixty three. He left behind his loving wife Mary and two daughters Laura and Becky. Even after leaving work as a captain, Peter was known to take vacations during shrimping season just for a chance to participate in an act he loved, and for a chance to catch a bucket full of Biloxi shrimp. The love for the Gulf Coast and his steadfast dedication to his work shined through in all of Peter J. Pitalo’s actions. He is remembered as a role model to many and loved by all those he encountered.