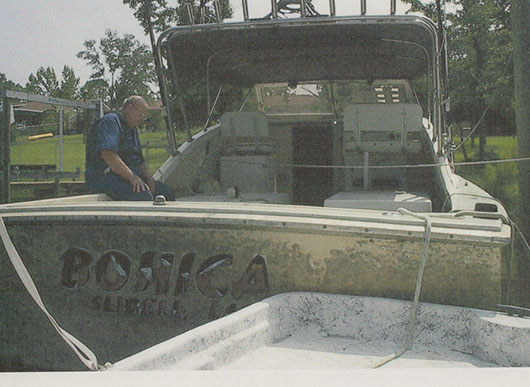 Born in Ocean Springs Mississippi in 1930, Captain Clarence A. Hamilton Jr. was both an industry tradesman and a boat captain. He was born to retired U.S. Coast Guard, Clarence A. Hamilton Sr. and Christine Fayard Hamilton. For much of his early life, Hamilton Jr. would live in the downtown Ocean Springs area. At an early age, Clarence was very involved with the maritime lifestyle of the Gulf Coast, and this included exposure to hurricanes. In 1935, at the mere age of five, the 1935 Labor Day Hurricane ravaged the Florida Keys. Clarence and his father happened to be in Coral Gables, Florida during the storm. As such, he swam alongside his father through one of the most severe hurricanes to strike the United States. This was the first of three storms he would swim through.

Clarence was an alumnus of St. Martin High School.  After graduating he attended Perkinston Jr. College before entering the University of Georgia. Following in his father’s footsteps, Clarence joined the U.S. Navy during the Korean War. For a number of years, Clarence worked as a civil servant at Keesler Air Force Base. After his military service, he began his career working in the seafood industry.

In 1961, he married Jane Sheely Hamilton, the two would enjoy a marriage of 48 years. Together they had two children; Clarence “Bo” A. Hamilton III, and Eleanor “Cissy” H. Hare. Alongside his wife Jane, Clarence became the co-owner of Hamilton Marine Surveyor Inc. Captain Hamilton would spend forty years as a surveyor conducting inspections of many vessels, with a specialization in the surveying of wooden boats. Hamilton Inc. conducted a broad range of services including condition evaluations, damage surveys, marine claims, and audio gauge evaluations.

During his career, Captain Hamilton became a member of the Society of Naval Architects, a position which earned him respect among boating professionals in the Southeast.  Among other notable evaluations of his career, Captain Hamilton inspected a wooden vessel known as the Nydia which was being stored at Tulane University in Louisiana. Following his inspection, he recommended the immediate repair and restoration of this vessel so as to prevent it from becoming derelict, an event which showcased Captain Hamilton’s authority as a surveyor.

Despite living through several of these torrential storms, Captain Clarence A. Hamilton Jr. passed away on December 14, 2009 at the age of 78. Captain Hamilton leaves behind a legacy of duty, service, and the resilience that many across the Gulf Coast share in regard to their way of life. As both a five year old and a seventy five year old, Captain Hamilton defied odds and swam through storms which claimed the lives of so many others. As legendary as such stories may be, his accomplishments in the industry, his loyalty to his community, and love for his family remain the true passions of his life.

Nominated by:  Captain Mark A. Hare