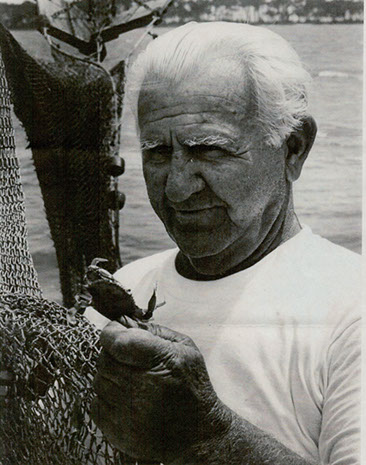 Anthony “Tony” Mihojevich was a captain and boat owner who made his career upon the bountiful waters of the Gulf Coast in Biloxi, Mississippi. Like many fisherman from the Gulf Coast, Tony was a European immigrant, he was born in the town of Bobovisca, Croatia on February 17, 1902. Two years later, at the age of two, he immigrated with his family to the United States and settled in Biloxi on August 15, 1904. His father, Steve Mihojevich had already arrived in Biloxi; Tony was accompanied by his mother Frances Mihojevich and his sister Mary.

Tony began his lifelong occupation of shrimping at the age of twelve. He was taught to catch shrimp by hand with a seine; work which he would later describe as being incredibly difficult. In 1921, at the age of eighteen years old, Tony became captain of his family’s fishing boat. During the Great Depression, life was terribly difficult.  Workdays usually stretched eleven hours or longer at a pay rate of ten cents per hour. Over a decade later, in 1935, he purchased his own fishing boat the Clementine Fountain; he would operate this vessel for over thirty years. Tony had many memorable experiences as a captain, including a shipwreck at Chandleur Island which he described as “the only time I ever got scared.”

In 1965, at the age of sixty, Tony Mihojevich retired from his life as a captain and took work with the Mississippi Department of Marine Resources. He would serve as an inspector for five years, a position that Tony was quite passionate about as a proponent of conservation and regulation of the seafood industry. His duties as an inspector included monitoring the shrimp and oyster catch along the coast to ensure compliance with state regulations.

Tony was honored in 1972 by being chosen as Shrimp King for the annual Biloxi Shrimp Festival and Blessing of the Fleet. In a Daily Herald article commemorating this event, Mihojevich stated younger generations were right for not going into his profession, as it was hard work. While he described his profession as a “matter of survival” the article also documented his daughters Stephanie Pizzetti and Claudette Quigley for their education and work in the medical industry. He and his wife, the former Angelina Russo, expressed a deep amount of gratitude that their daughters were able to receive the education that they did not.

Tony was a longtime member of the Slavic Benevolent Association. In 1973, he was selected by the University of Southern Mississippi to participate in the Oral History Program recording individuals in the fishing industry along the Mississippi Gulf Coast. His rich legacy lasted until 1982, when on February 28, Anthony “Tony” Mihojevich passed away. Throughout his lifetime, Tony exemplified what it meant to be a hard worker in the seafood industry. He had a deep love for his family and is described as personally ensuring that each of his ten grandchildren were registered to vote when they turned eighteen. Among various quotes recorded in his oral history, perhaps the most revealing was “If I had it to do over again, I would not change a thing.”