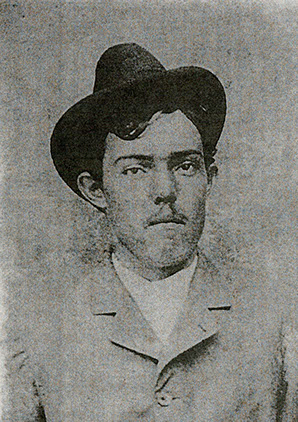 Amos Ross is described as “a fisherman’s fisherman” in Clark Shaughnessy’s biography of Mr. Ross.  He was a commercial fisherman and boat owner. Amos was born on December, 3, 1885, in Herron Bay, Alabama. He was the son of George and Rehema (Collier) Ross, one of fourteen children. He would grow up to work in the seafood industry for forty-three years. His career as a fisherman was described by him as “battling with the sun, the wind, rain, tides, sails, gear, and the fickleness of fortune.”

Amos would recall an incident in 1913 when he was believed to have sailed through a hurricane. His ship dropped all anchors but was still dragged ten miles into marsh. The crew would remain awake through the night in what Amos described as a “vigil,” waiting for the wind to subside. They successfully weathered the storm and sailed back to Biloxi.  Their steering mechanism was destroyed by the heavy pounding of the sea.  The crew was forced to steer the ship by rope. There was great concern that the ship could sink.  Against all odds, they managed to sail back into the Biloxi harbor, and were met with great applause.

Ross survived yet another hurricane in Bayou La Mare, Louisiana. This time, in an attempt to save his schooner, he ordered the masts chopped out. Amos recalled that the boat was still rocked by the heavy waves, even with the mast chopped. He managed to keep his boat and three others afloat, and his eighteen-man crew made it back to Biloxi, a ninety-mile distance.

Ross spent many years fishing for a variety of companies, including the Southern Shell Fish Company, a job which resulted in his only loss of employment when his ship was rammed by a drifting log. In spite of this loss, Ross was interested in schooner racing and sailed in six races in the Biloxi Regattas of the early 1900s. He was a popular racer, known to many as “Captain Amos”.  After briefly trying his hand with diesel boats, Ross retired from the water in search of other work.

His wife, Sophie Duggan Ross, made a suggestion in 1938 that would direct the later years of his life. She suggested that Ross operate a small restaurant as well as a taxi company. By 1940, his taxi company had grown to eight cars in total. On the morning of his sixty-fifth birthday, Clark D. Shaughnessy Jr. interviewed

Captain Amos and recorded many of these memories for future generations. Captain Amos Ross passed away on April 12, 1965, leaving behind six sons, two daughters, eighteen grandchildren, and eight great-grandchildren.

Captain Amos was a tenacious and flexible man, regarding storms as well as careers. When one option did not work, he never hesitated to find another path.