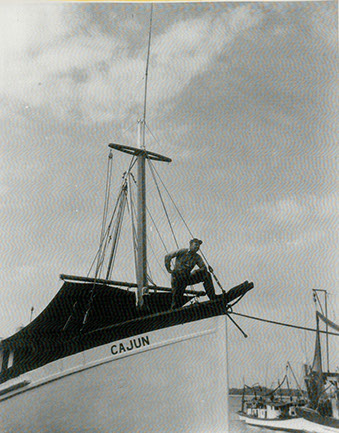 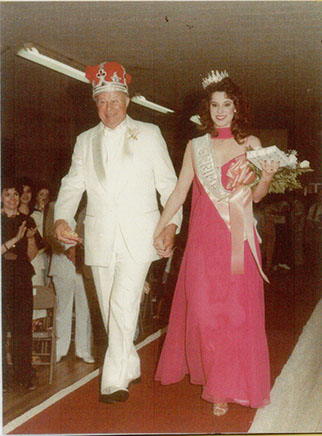 Albert J. Misko Sr. was a boat owner and captain from Biloxi, Mississippi. He was the owner of the Cajun, a Biloxi lugger constructed from cypress. Albert was born in Biloxi on March 7, 1915 to George Misko and Madeline Pitalo, immigrants from the Island of Brac off the Dalmation coast. Born into a large family, Albert was the fourth of eleven siblings and began working at a young age. From the time he was twelve years old, he began working alongside his father in the seafood industry, assisting with shrimping, fishing, and oystering. Albert continued working with his father throughout the 1920s, developing skills and experience on the water.

By 1932, Captain Albert began running his first boat, the Winnie Davis, a boat which ran strictly by sail. Over the next decade, Captain Albert piloted the Winnie Davis throughout the Gulf, until 1947, at which time he had his first vessel constructed. This boat was the Cajun, built by his cousin, Nick Misko. The Cajun was a 52-foot cypress hull with a 3-foot draft and was 14-feet wide. The boat was designed for shrimping and oystering, it had an 110hp engine capable of hauling full loads of oysters and shrimp. Eventually, Captain Albert was able to purchase a second boat, the Leddie D, from the Southern Shellfish Company. Captain Albert once described his largest catch as twelve barrels (or 2,640 pounds of shrimp) in two fifteen minute drags.

Beginning in 1942, Captain Albert served in the United States Navy for four years during World War II.  He served as a Boatswain’s Mate First Class until he was honorably discharged. After returning from war, Misko also served as President and Treasurer of the Fishermen’s Union. Beyond his acquisition of the Cajun, 1947 also saw Captain Albert’s efforts in assisting in searching for lost fishermen during the 1947 Hurricane. Because of Misko’s extensive knowledge of the waters and Louisiana marsh lands, he was personally requested by Mayor Cousins and State Senator McDonnel to lead the search efforts for two hundred Biloxi fishermen who were unaccounted. Misko accompanied the Coast Guard from Keesler Airforce Base, and through his efforts, many of these lost fishermen were recovered and brought home safely.

In 1954, Misko married Eunice Leckich Misko and had two children. Captain Albert again assisted in hurricane efforts in 1969, during Hurricane Camille. Against the orders of the National Guard to not cross the Biloxi-Ocean Springs bridge, Misko led a group of fishermen across the damaged structure who were recovered from Fort Bayou. Captain Albert did this at great cost to his own life, as the National Guard threatened to shoot if he crossed. Despite this, Misko led his fellow men to safety.

1973 saw Misko appointed as Assistant Chief of the Mississippi Marine Conservation, an organization that is known today as the Department of Marine Resources (DMR). In his life, Misko also served as the head of the Gulf Coast Shrimpers and Oystermen Association, a member of Governor Waller’s staff, a lifelong member and treasurer of the Slavonian Benevolent Association, and a member of St. Alphonsus Catholic Church. In 1984, Captain Albert Misko was honored as being named the 29th Shrimp King in the annual Biloxi Blessing of the Fleet, following in his father’s footsteps. Albert Joseph Misko Sr. passed away on April 21, 2006, celebrating a long and rich life on the Mississippi Gulf Coast. Captain Albert’s love and dedication to his home can be seen time and time again out of the acts of selflessness he performed to protect both his homeland and his people. Whether it was serving his country in World War II, leading fishermen to safety, or performing various services to his community, Captain Albert exemplified all the virtues of his generation.